A couple months back, I was fortunate enough to be featured in Ceramic Monthly’s first installment of their “Studio Visit” section. Since then, I have been getting a steady stream of inquiries about my homemade tile bat system, so I thought I would share a detailed explanation of it for all to see.

I conceived of and built this tile bat system nearly 10 years ago while an undergrad at the University of Wisconsin Whitewater. At the time, I had a few major problems to solve, and as they say, necessity is the mother of invention. I needed bats, and lots of them. The studio at UWW did not provide bats, you had to get your own. I had a few plasti-bats and a few other assorted brands and materials. I didn’t really like any of them. The Plasti-bats would jiggle on the pins, slowly growing the holes and making elliptical pots – unacceptable. The Creative Industries injection molded ones were better, but had deeply grooved undersides that would latch on to any sort of studio debris, and as a porcelaineophile working in a mixed-clay studio, that didn’t work so well. Little chunks of stoneware kept finding their way into my clay via the undersides of these bats. I had a couple masonite bats. I shouldn’t even have to explain why those weren’t working. The particle board bat I had develped a lump of waterlogged swollen fragile wood right in the middle. I did not want to pour plaster bats, as they would be very hard to keep from wrecking my and everyone else’s work from the inevitable lime pops associated with plaster dust finding it’s way into the clay. So anyway, from all these bats I had purchased, I knew what I DIDN’T like. Then I started thinking about what I wanted out of my bats.

Having limited space, as all students do, I wanted maximum shelf utilization. How often to we really need the full 13 inches of diameter? I wanted a material that would not have the possibility of warping or flexing. Even way back then, I had already lost many pots to the bat flexing as it was removed from the wheelhead and thereby warping the pot on top of it. I wanted to be able to have more bats than I would ever need to use, so that I would never be forced to stop working early or be tempted to flip a pot too early just so I could keep making work. I also was quite poor, so couldn’t afford to shell out a few hundred bucks to make that happen with 10 dollar bats. I finally decided to throw on tiles, which have all the things I want, and none of the problems I had experienced with other bats. I used a couple of my old plasti-bats to make the holder. 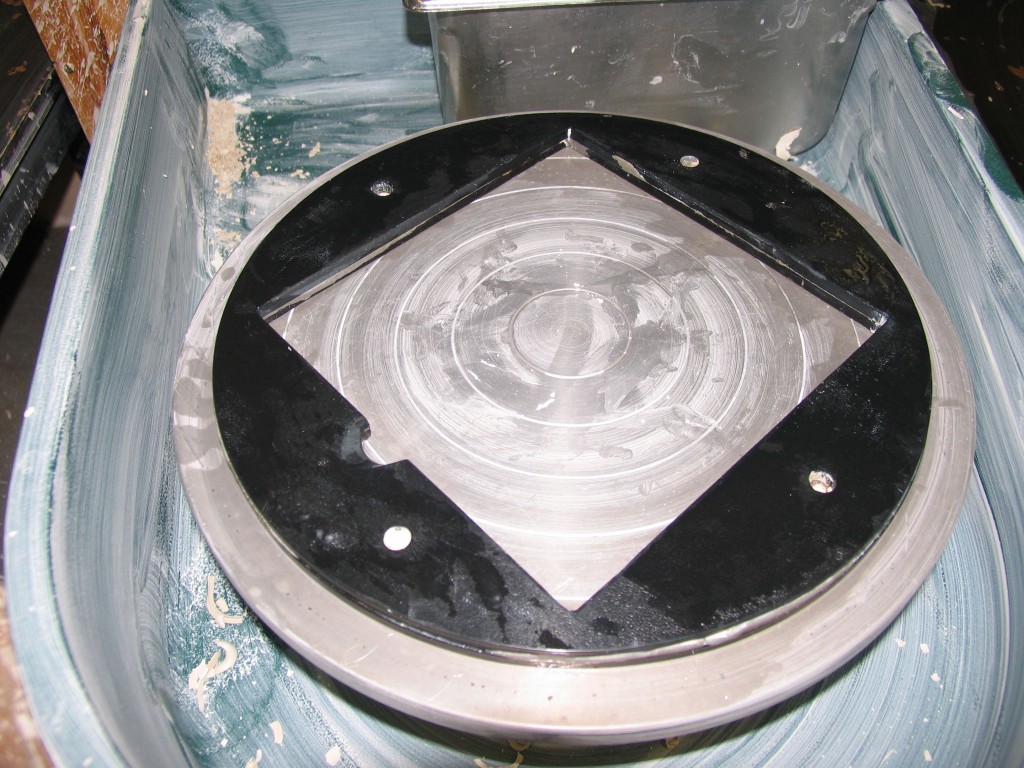 I started by purchasing the tiles. I simply drove to the Menard’s store in Janesville to see what was on hand. I found VersaTile 8 inch unglazed quarry tile. These are the kind of tiles you would do a patio in, not a kitchen, as they have a textured and porous surface, not the easiest thing to clean. For my purposes, however, they were perfect. The texture helps the clay grab on. The porosity sucks the clay on, and even promotes even drying through absorption while the pot is still attached, although not as effectively as plaster. At the time, they were a mere $.50 each. I purchased 30 of them to start, all for the price of one or maybe two other bats. 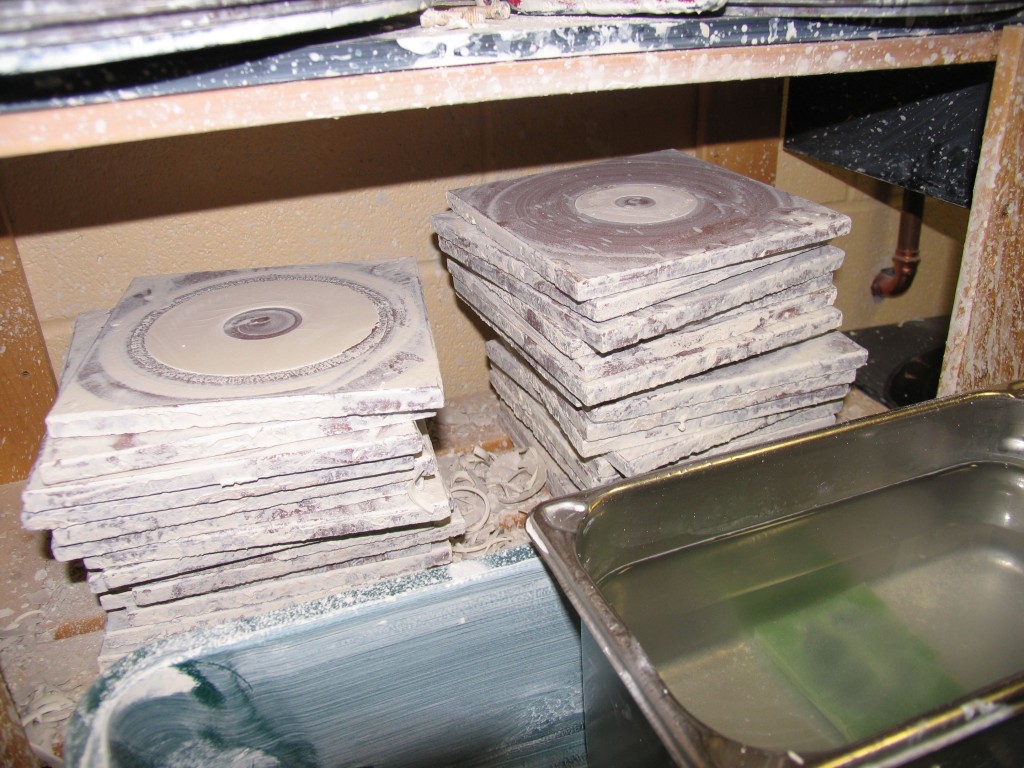 Then I had to figure out how to mount the tiles on the wheel and keep them centered. 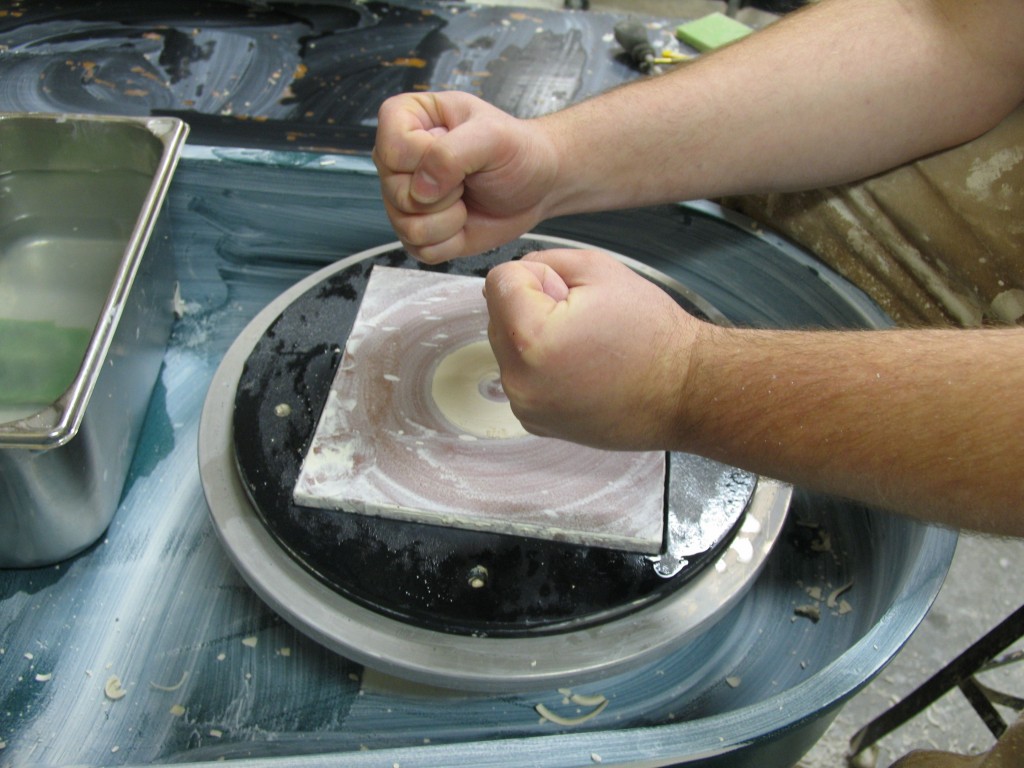 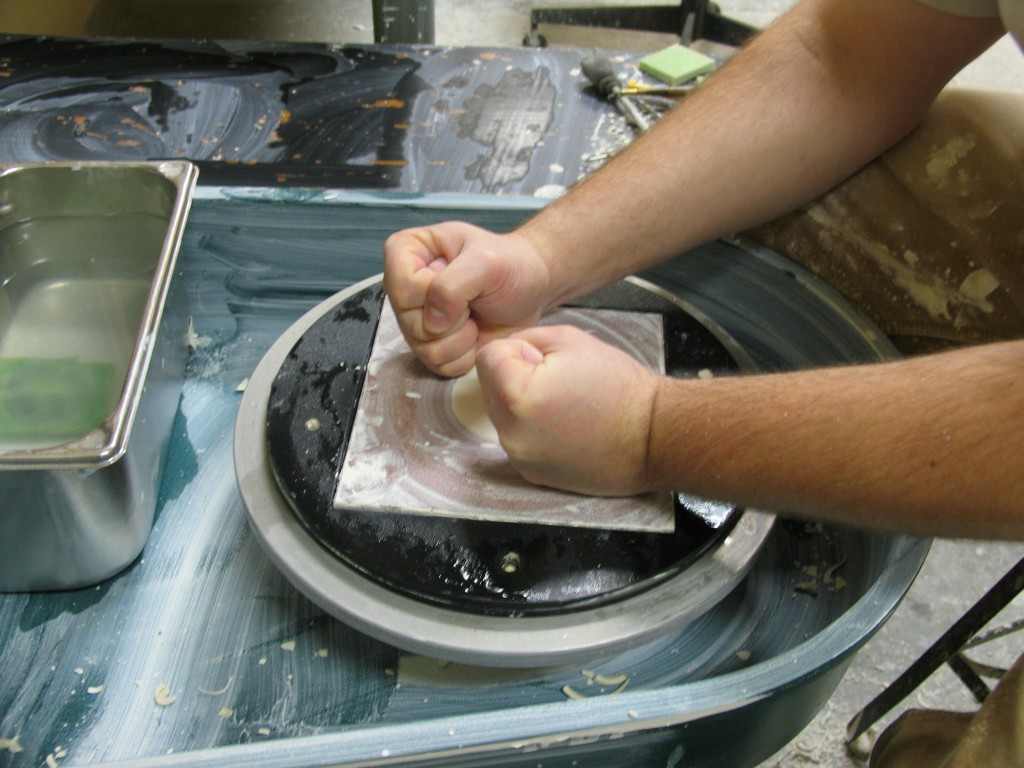 I noticed that the thickness of one tile was almost exactly that of two plasti-bats, so I went ahead and epoxied the two plasti-bats together, planning to cut a tile-sized hole in them to accept the tiles. I put the new 2-ply bat on the wheel and then centered a tile on top of that. Once it was perfectly alligned, I carefully traced it with a scribe, and cut out the middle with a jigsaw. I cut the hole slightly too small and then filed and sanded it to fit perfectly. I then cut a notch into it so that I could use a screwdriver to pry the tiles up to get them off the wheel. 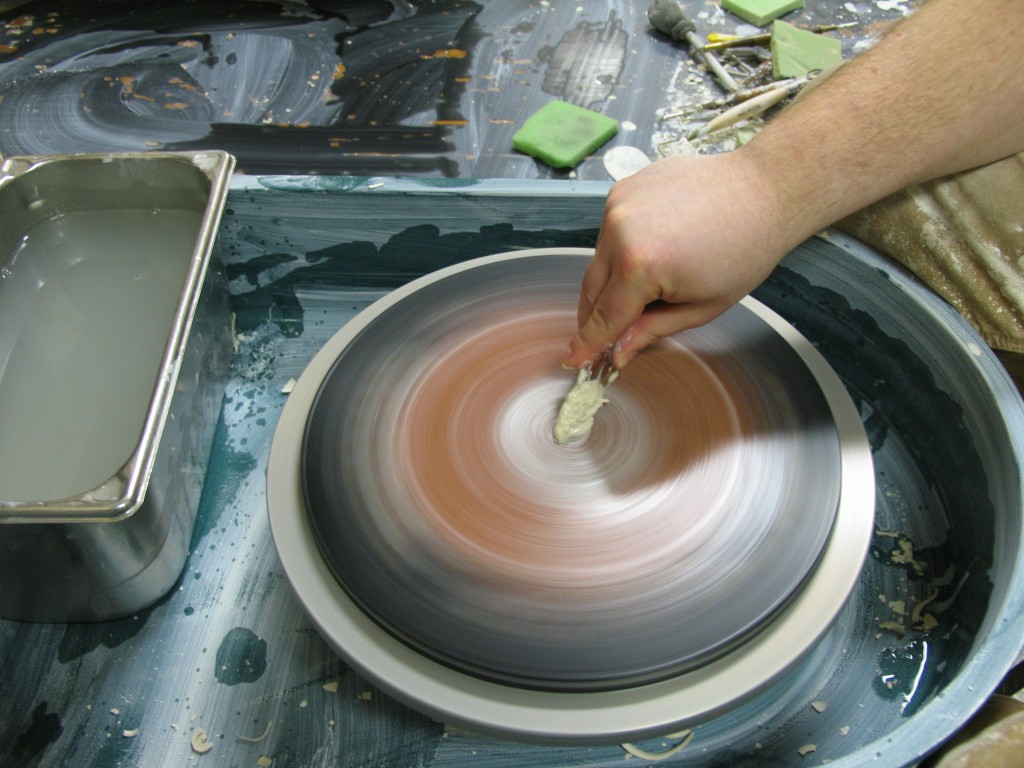 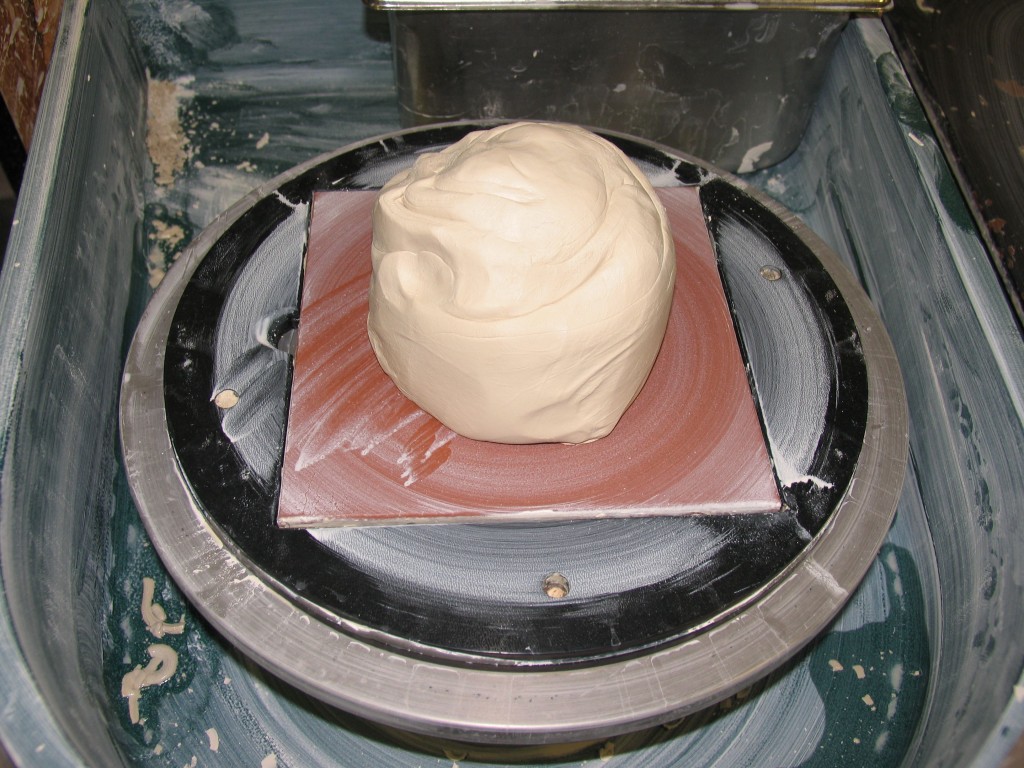 I use these tiles to throw pretty much everything except plates and platters. For those I use my stockpile of Creative Industries plastic bats. Even my largest bowls have a footprint smaller than 8 inches across, so this works perfectly even for those. 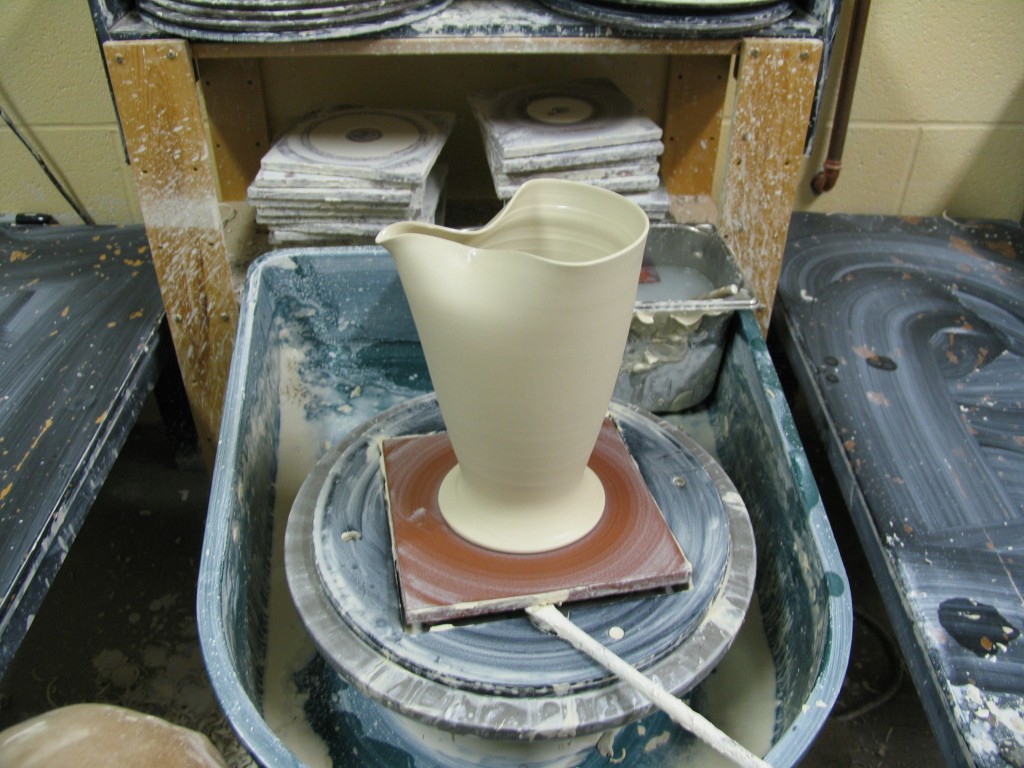 When throwing, I use 4 small chunks of soft clay to level the tile with the bats. I place them in the corners and then smack them down. I do this once per session. The clay will hold until it becomes either bone dry or waterlogged. 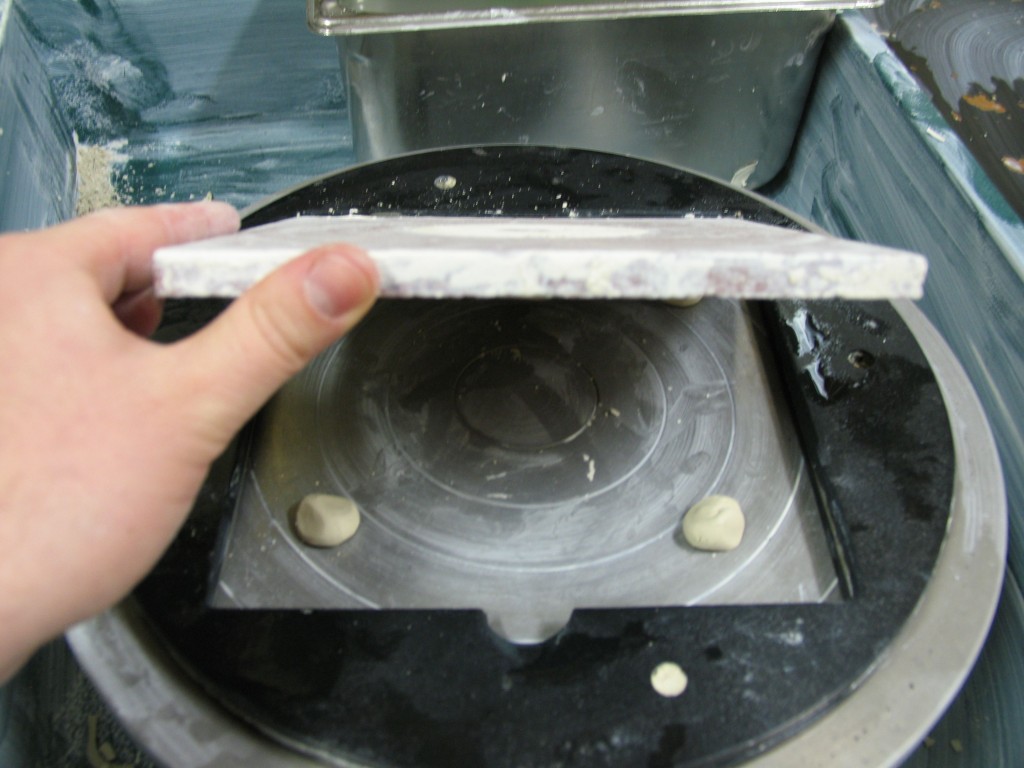 In the decade since I made this system, I have had no problems. The tiles are now perhaps a bit jiggly, but I’ve learned to apply the right kind of pressure while throwing so that they do not wiggle any more. I have only broken a few of the tiles over the years, and have been able to buy replacements at Lowe’s and Home Depots in Indiana and Kentucky as needed. It has proven to be a worthwhile investment of one afternoon, a long, long, time ago.