The Making Of: A Flowerhead Vase

A lot of people have been asking how I make my pots. Today, I finally got the camera into the studio, and did my best to document the making of one of my Flower Head Vases, like the one pictured to the right. 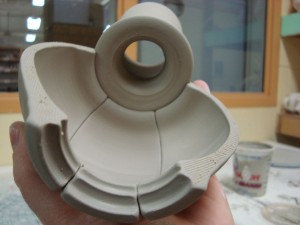 Above is a picture taken looking up through the bottom of the vase, right before final assembly. Here’s the process start to finish:

The bottom segment, which has already been thrown, dried to leather hard, and trimmed, is cut in half vertically with a razor blade. The two halves are then smoothed with a sponge, and scored using a Mudtools Long Stainless Steel Scraper with medium teeth. The segment on the left has been scored while the one on the right is freshly cut without alteration to show this step. 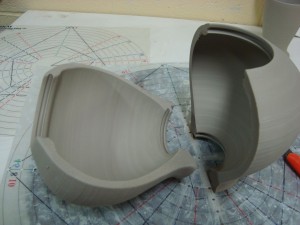 I apply my joining slip to both halves, using small repetitive stokes in both directions parallel to the direction of the score marks. I take great care to make sure the slip is down inside the score marks, completely filling them. I carefully sponge off the excess slip from the edges and align the two halves. I apply pressure along the entire seam. I let the newly joined piece sit for 1 minute or so until the bond sets up. This is what it looks like. 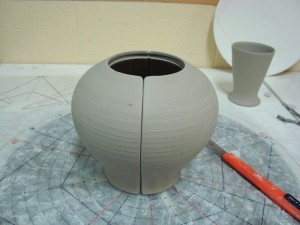 I carefully align the piece on my MKM Decorating Disc, since this will ultimately be cut into 6 segments, I use the blue 6-fold lines. I put the piece so that the seam is on one of those lines and it is centered. 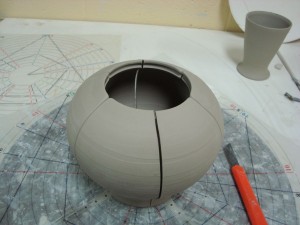 Using the other blue line as a guide, I vertically cut the part in half once again, now you can see how the first seam is a drawn line, and the new cut will become a second drawn line.

The joining and cutting process is repeated one more time. 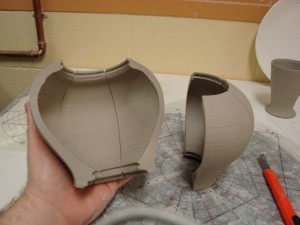 The floor of the pot, a separately thrown and trimmed little disc, is inserted into the groove that I trimmed in there earlier. I throw, trim, and sign many of these discs and store them, I select the one that is the best fit by trial and error. 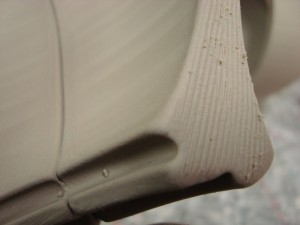 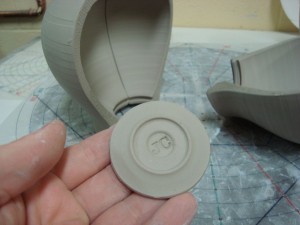 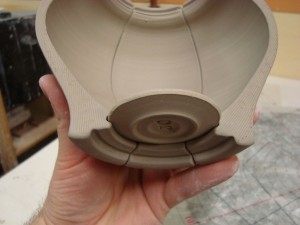 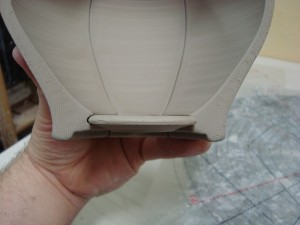 In much the same way, the top segment, which was thrown, trimmed, and adjusted to fit using a sponge, is inserted into the upper groove. I do a test dry fit, to make sure nothing is so small that it wiggles, or so big that the seam cannot fully close. 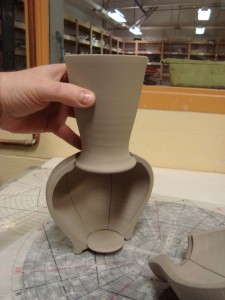 Once this is done, I slip the two halves, sponge off the excess slip, reinsert the other parts, and then stick it all together. It is at this point that I wish I had three arms instead of just the two. 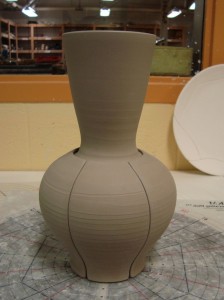 I know I’m crazy for doing this, people tell me that all the time. Check out those seams on the middle and underside. I can’t get enough of that. To me, it is absolutely worth all of this effort. 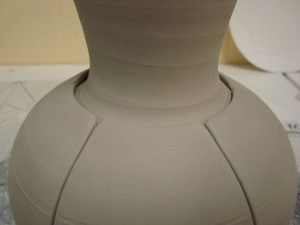 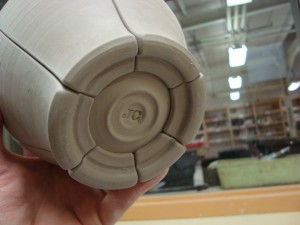 Thanks for reading this, I hope you enjoyed it. Please leave questions/comments!